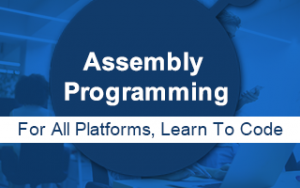 Assembly Programming For All Platforms, Learn To Code

What is Assembly Language?

Each personal computer has a microprocessor that manages the computer's arithmetical, logical, and control activities.

Having an understanding of assembly language makes one aware of −

Other advantages of using assembly language are −

The main internal hardware of a PC consists of processor, memory, and registers. Registers are processor components that hold data and address. To execute a program, the system copies it from the external device into the internal memory. The processor executes the program instructions.

The fundamental unit of computer storage is a bit; it could be ON (1) or OFF (0) and a group of 8 related bits makes a byte on most of the modern computers.

So, the parity bit is used to make the number of bits in a byte odd. If the parity is even, the system assumes that there had been a parity error (though rare), which might have been caused due to hardware fault or electrical disturbance.

The following table shows the positional values for an 8-bit binary number, where all bits are set ON.

Hexadecimal number system uses base 16. The digits in this system range from 0 to 15. By convention, the letters A through F is used to represent the hexadecimal digits corresponding to decimal values 10 through 15.

Hexadecimal numbers in computing is used for abbreviating lengthy binary representations. Basically, hexadecimal number system represents a binary data by dividing each byte in half and expressing the value of each half-byte. The following table provides the decimal, binary, and hexadecimal equivalents −

To convert a binary number to its hexadecimal equivalent, break it into groups of 4 consecutive groups each, starting from the right, and write those groups over the corresponding digits of the hexadecimal number.

To convert a hexadecimal number to binary, just write each hexadecimal digit into its 4-digit binary equivalent.

Rules (iii) and (iv) show a carry of a 1-bit into the next left position.

A negative binary value is expressed in two's complement notation. According to this rule, to convert a binary number to its negative value is to reverse its bit values and add 1.

To subtract one value from another, convert the number being subtracted to two's complement format and add the numbers.

Overflow of the last 1 bit is lost.

The process through which the processor controls the execution of instructions is referred as the fetch-decode-execute cycle or the execution cycle. It consists of three continuous steps −

The processor may access one or more bytes of memory at a time. Let us consider a hexadecimal number 0725H. This number will require two bytes of memory. The high-order byte or most significant byte is 07 and the low-order byte is 25.

When the processor gets the numeric data from memory to register, it again reverses the bytes. There are two kinds of memory addresses −