C is a general-purpose, procedural, imperative computer programming language developed in 1972 by Dennis M. Ritchie at the Bell Telephone Laboratories to develop the UNIX operating system. C is the most widely used computer language. It keeps fluctuating at number one scale of popularity along with Java programming language, which is also equally popular and most widely used among modern software programmers. 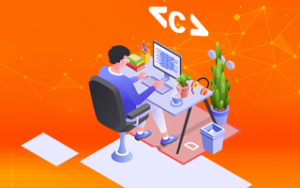 You Save
Gift Course Use your certification to make a career change or to advance in your current career. Salaries are among the highest in the world.

We have 30 Million registered users and counting who have advanced their careers with us.

Training for a Team

Affordable solution to train a team and make them project ready.